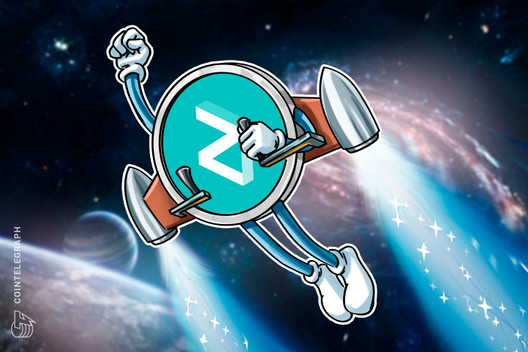 Zilliqa may be due for a correction after monstrous gains as (ZIL) price is running into some considerable resistance levels on the charts.

While the price of Bitcoin (BTC) has been consolidating under $10,000, several altcoins have shown tremendous rallies such as Theta Token (THETA) and Zilliqa (ZIL).

Zilliqa, in particular,  the 40th-ranked cryptocurrency by market capitalization, has seen a surge of 950% since the crash in March, which warrants an analysis of whether ZIL’s monster rally is finished or just getting started. 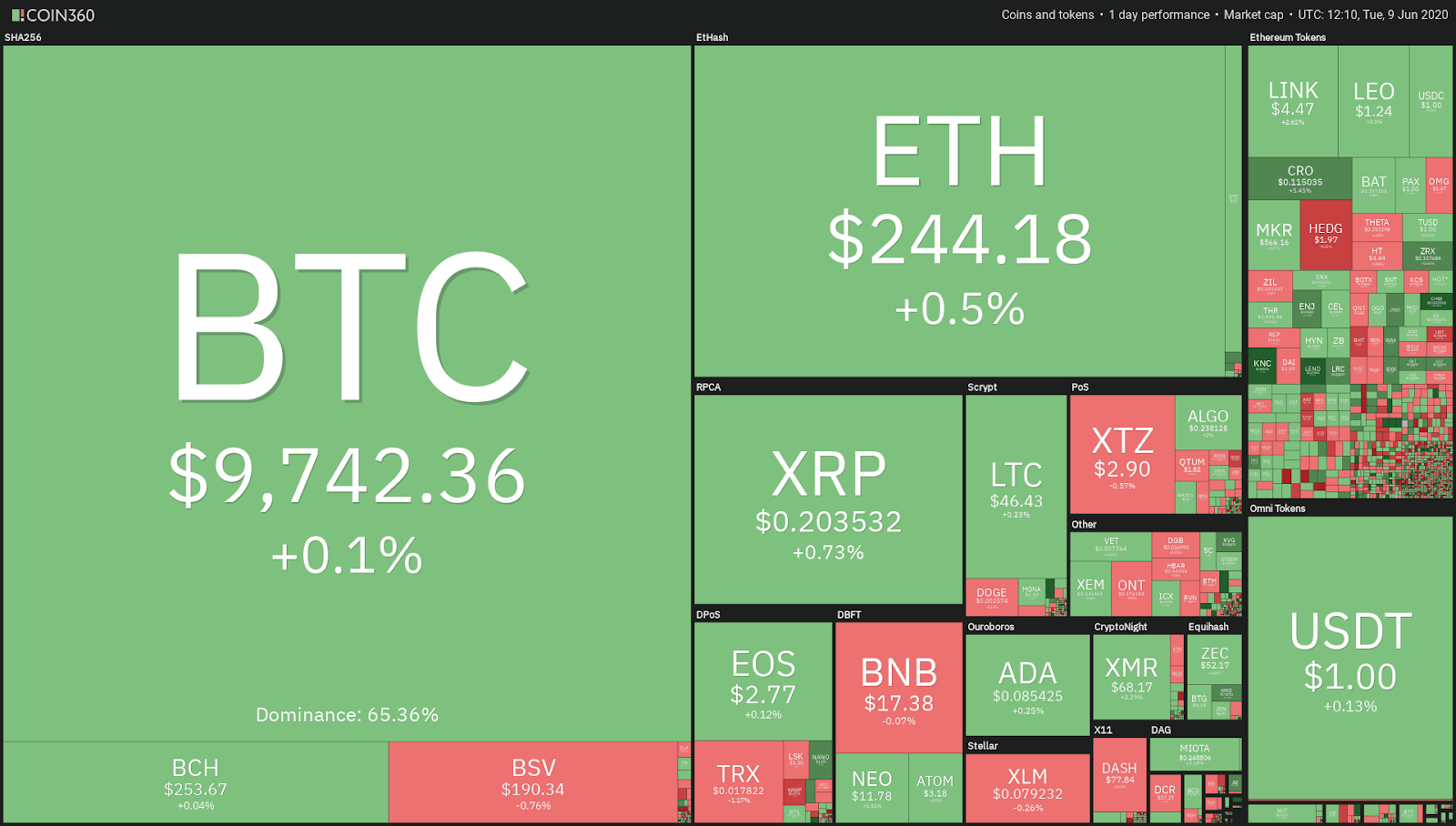 After Zilliqa hit its cycle low at $0.0022, the cryptocurrency rallied massively towards $0.02. That’s a surge of 950% and is one of the largest in recent times.

However, as the chart shows, the price of Zilliqa is currently inside a resistance area, in which it’s not expected to see a further move to the upside. 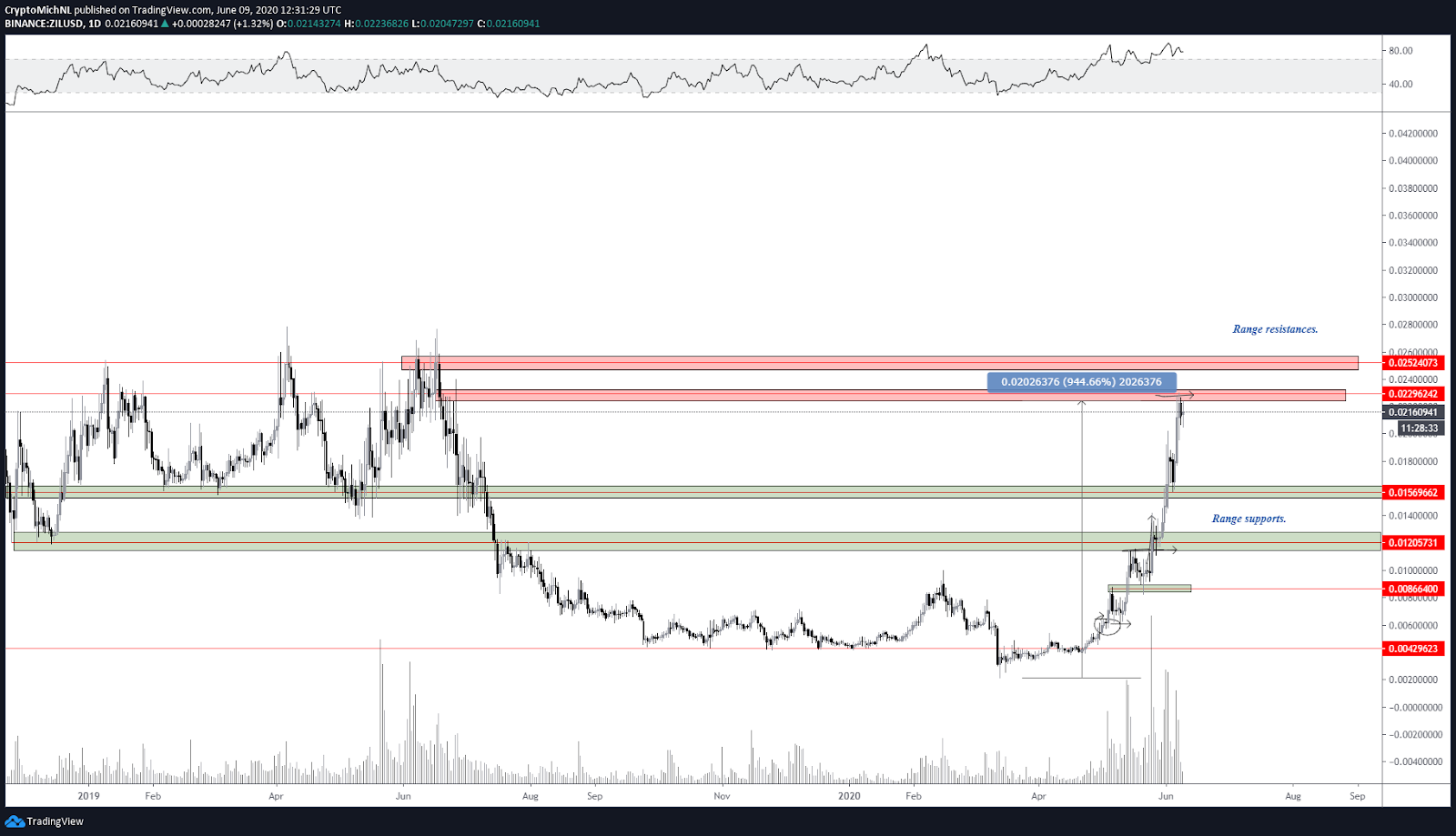 Does that mean that you’d be market buying the coin here as it has been performing well in recent periods? No, in trading, it’s always useful to chart and analyze the price action of a particular asset before you’d decide to trade.

In the case of ZIL, the upwards potential, short-term, is lower than a potential correction to the downside. So what levels should you be keeping an eye on?

Most likely, a corrective move towards $0.012-0.015 is not out of the ordinary and would provide a healthy, natural correction before a new impulse wave to the upside is ready to unfold.

The potential scenario for watching a trend reversal

A likely scenario for a trend reversal can be classified through a bearish divergence structure as shown in the chart. 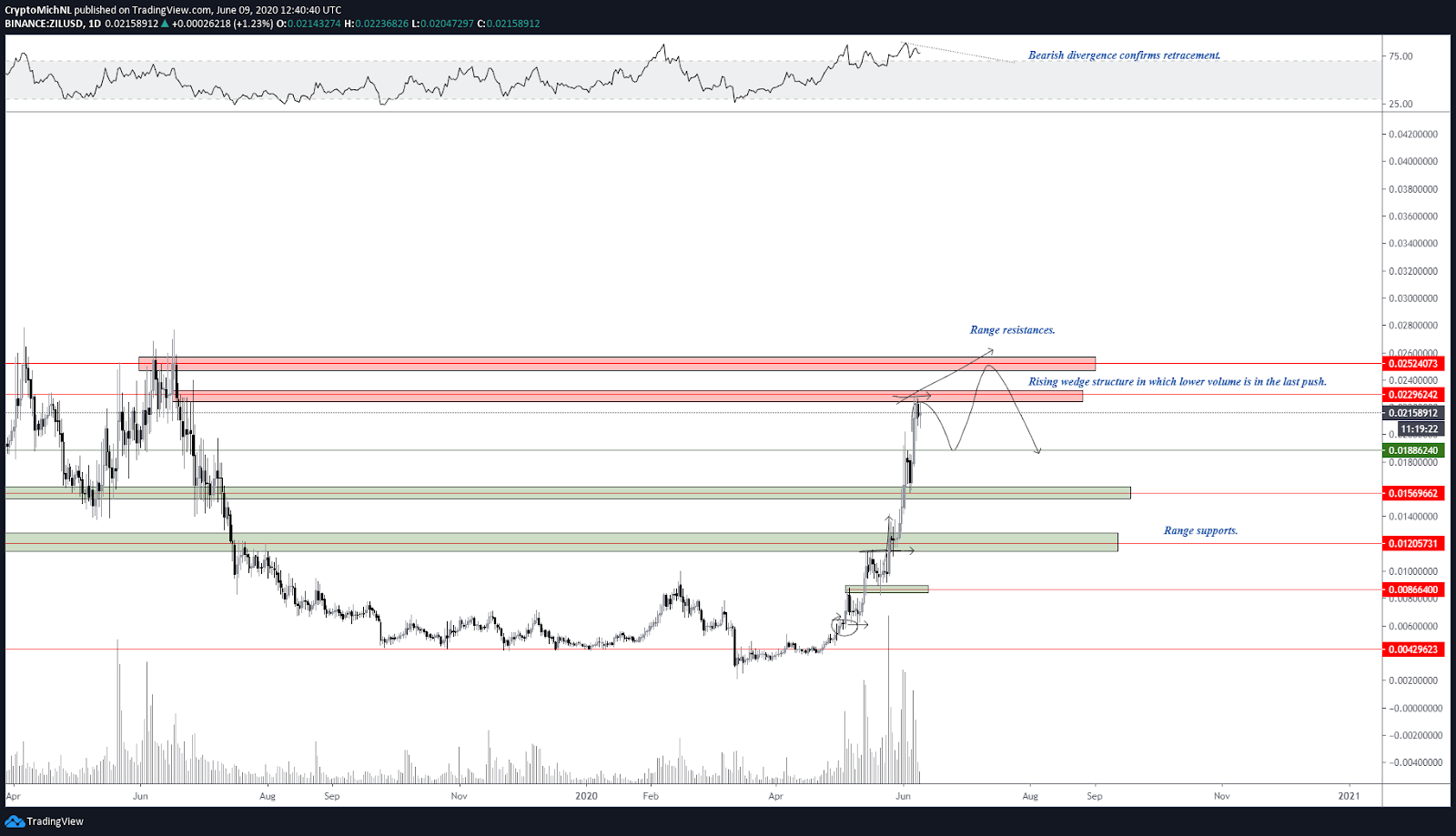 Usually, an uptrend ends through signals from indicators in which a bearish divergence combined with a rising wedge (and generally against a resistance) is a significant signal for downwards momentum.

Hence, to sustain momentum upwards, the price of Zilliqa needs to remain above $0.019. If that succeeds, another push towards the resistance zones at $0.023-0.025 is likely to occur.

Traders should watch for a potential top structure in this resistance area, in which a bearish divergence would be one of the signals. In that regard, the last push regularly moves without volume or a decrease in volume. It makes a rising wedge, ending in a drop. 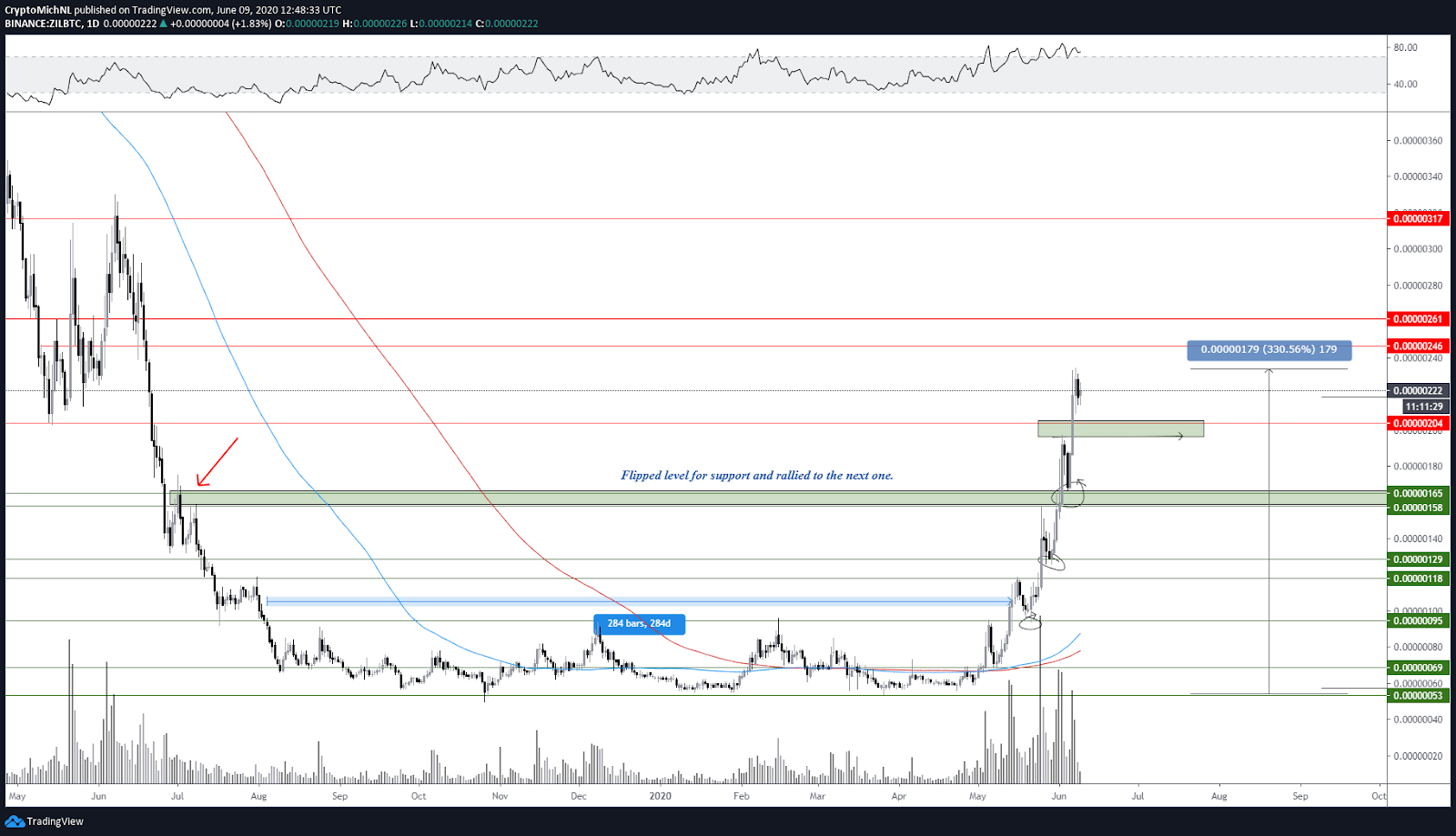 The BTC pair of Zilliqa is showing a constructive accumulation range of ten months. The breakout of this range caused a substantial rally as the price of Zilliqa rallied by 330% in the BTC pair.

What are the signals to see how these movements can occur? One of the significant signals for a potential surge to occur is the support found at the 100-day and 200-day moving averages (MA), which are a crucial indicator for bull/bear movements.

The next massive indication of further surges to the upside is the support/resistance flip at 0.00000095 sats as that level has been providing resistance for several months. 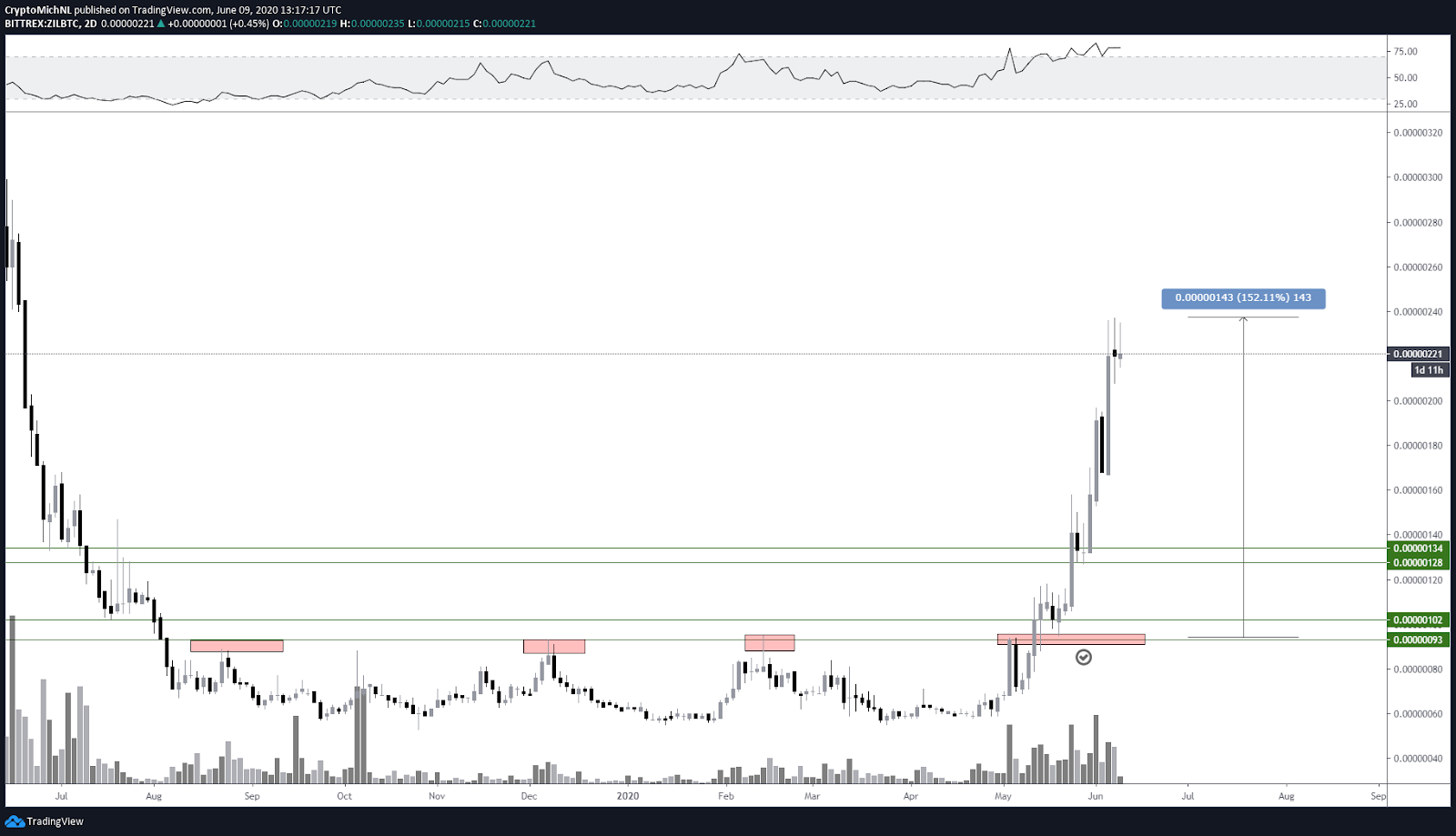 But Zilliqa isn’t the only altcoin looking bullish. More charts are looking identical to ZIL prior to the breakout. One such crypto altcoin is Stellar Lumens (XLM), the 13th-ranked cryptocurrency by market capitalization.

Stellar Lumens to follow Zilliqa and break out of the accumulation range? 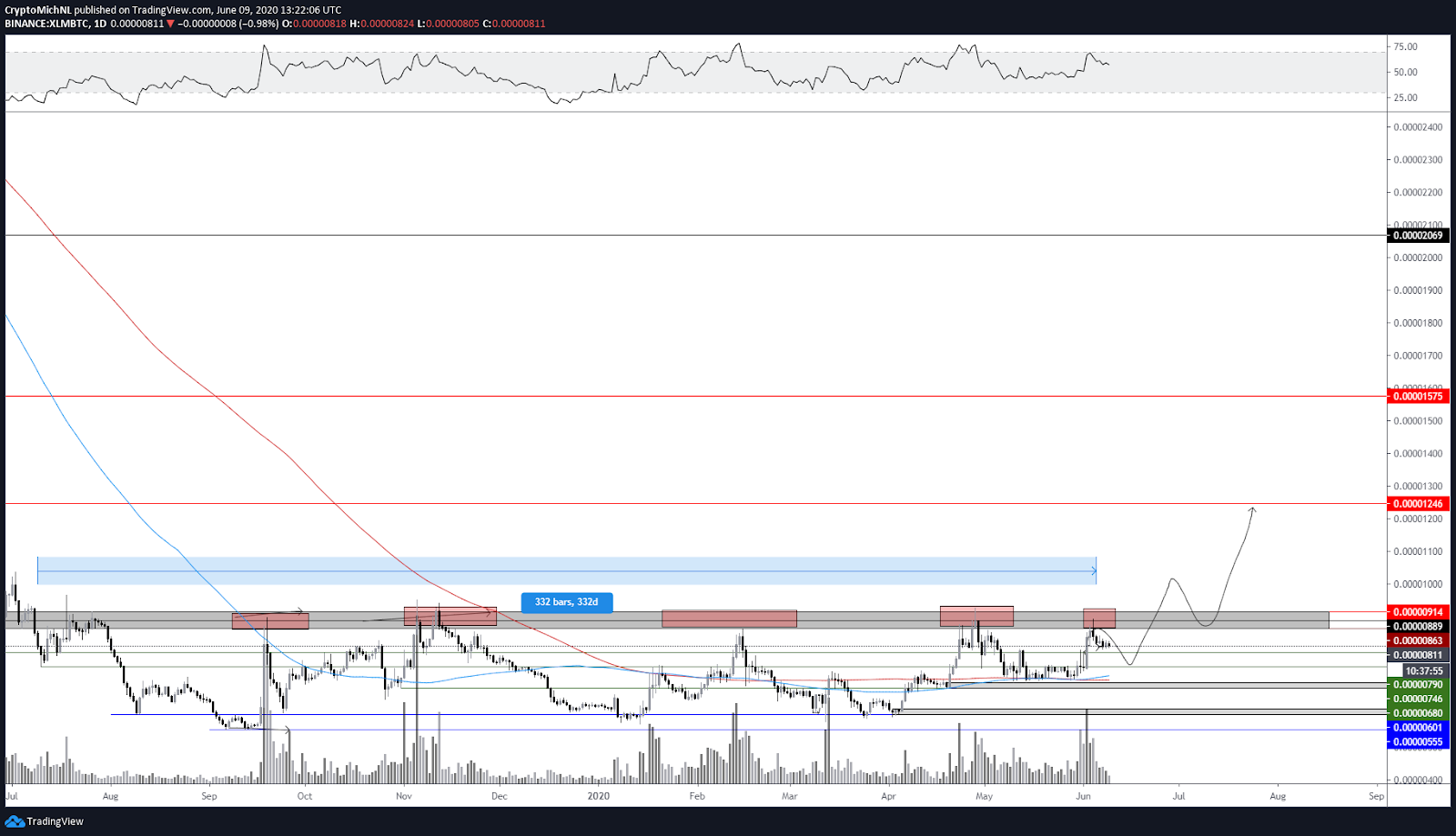 The BTC pair of Stellar Lumens is showing a clear range-bound structure. In this case, the accumulation range has been in place for almost a year.

Clear confluences with the Zilliqa chart in which the 100-day and 200-day MAs are acting as support since May. Next to that, the resistance zone has been tested multiple times. A renewed test of this resistance should lead to a breakout.

What to look for? Once the resistance area between 0.00000860-0.00000910 flips for support, a trigger is given for potential further upward continuation. 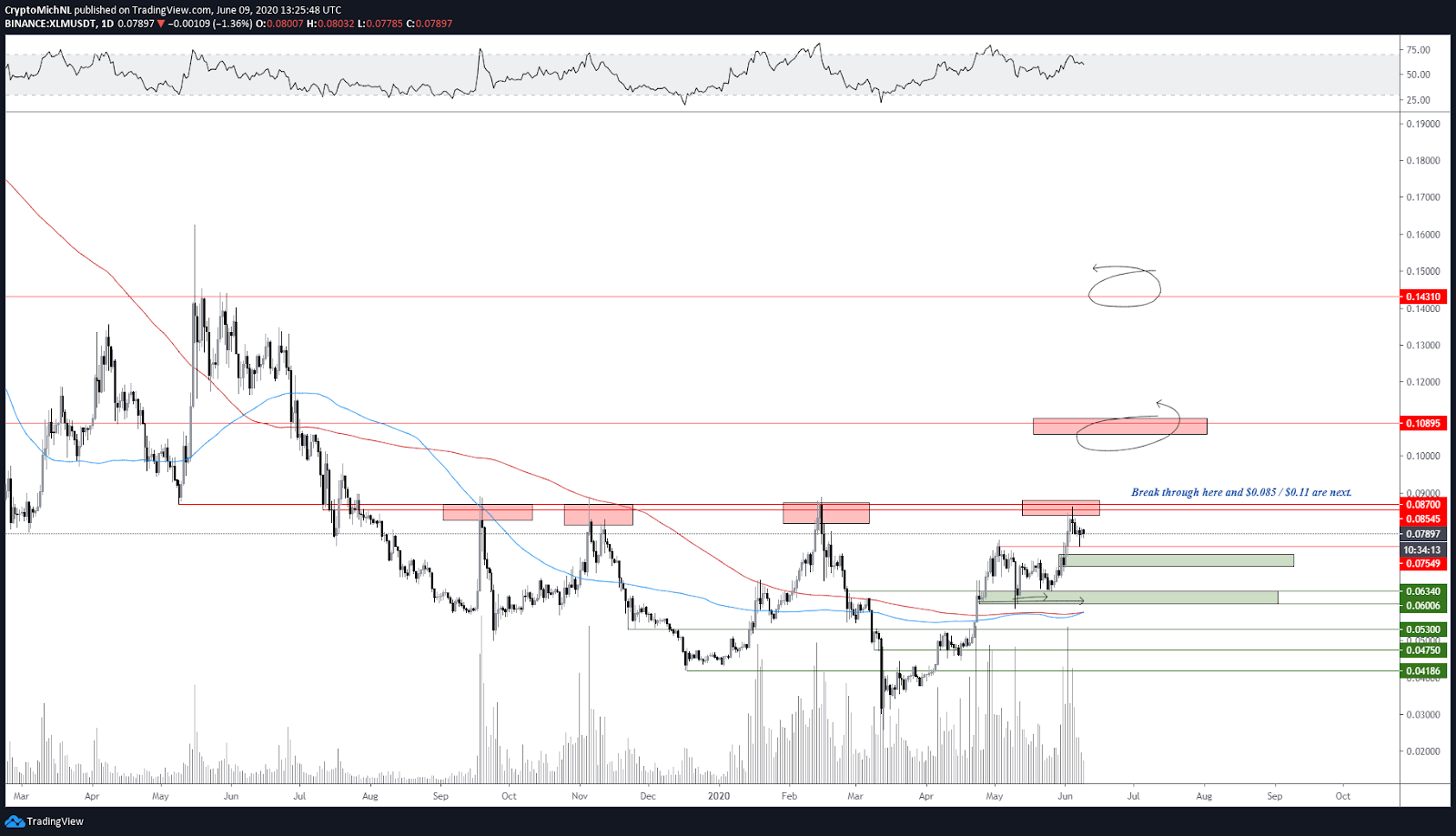 The USD chart of Stellar Lumens is showing many similarities with the BTC pair. Strong uptrend since the crash of March 12, while the resistance area has been tested several times as well.