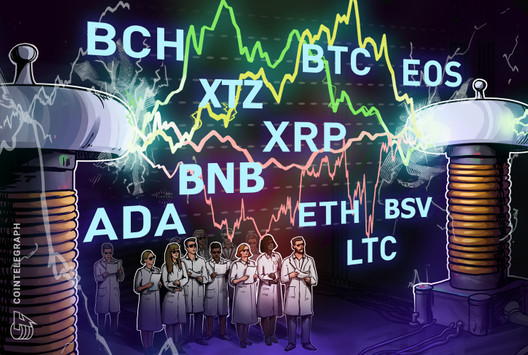 Institutional investors are showing greater interest in cryptocurrency and this could result in a sharp move within the next few days.

About one-third of institutional investors surveyed by Fidelity said they have invested in digital assets. 25% of the survey participants said that they hold Bitcoin (BTC) and 11% confirmed that they hold Ether (ETH). While these are encouraging signs, the future looks even brighter as 91% of survey participants expect to hold at least 0.5% of their portfolio in crypto assets in the next five years.

Total Bitcoin options open interest has risen from $1 billion on May 7 to over $1.5 billion on June 9, according to data from Skew. This shows growing interest among institutional investors who expect the top-ranked cryptocurrency on CoinMarketCap to make a decisive move within the next few days.

For the past few weeks, the U.S. stock markets have been surging as optimism for a sharp economic rebound grows. The technology-heavy Nasdaq hit new lifetime highs which shows the euphoric sentiment among investors. However, eToro CEO Yoni Assia has cautioned investors of a stock market crash within three weeks.

If the equity markets do correct sharply, the money is likely to flow into safe haven assets. Even if a fraction of these funds enter Bitcoin a sharp move to the upside could take place.

Let’s study the charts to determine the critical levels to watch.

Bitcoin (BTC) is getting ready for a large move. As the 20-day exponential moving average ($9,556) is gradually sloping higher and the relative strength index is in the positive territory, the advantage is with the bulls.

A breakout and close (UTC time) above the symmetrical triangle will signal strength and could result in a possible rally to $10,500. This is the critical resistance to watch out for because if the bulls can scale the price above it, the BTC/USD pair is likely to pick up momentum and rally to $12,000.

This bullish view will be invalidated if the pair reverses direction from the current levels and plummets below the support line of the triangle. Below the triangle, a decline to $8,130.58 is likely. A break below this critical support will turn the trend in favor of the bears.

Although Ether (ETH) scaled above the immediate resistance of $247.827 on June 9, the bulls could not sustain the breakout. This suggests a lack of demand at higher levels. The price has again dipped back into the $247.827–$233.449 range.

However, as long as the price remains inside the ascending channel and the moving averages continue to slope up, the advantage remains with the bulls.

If the second-ranked cryptocurrency on CoinMarketCap rebounds off the 20-day EMA ($231), the bulls will attempt to push it above the $249.699–$253.556 resistance zone. If successful, a move to the resistance line of the ascending channel at $280 is likely.

Conversely, if the bears sink the ETH/USD pair below the 20-day EMA, a drop to the uptrend line and then to the 50-day simple moving average ($212) is possible. A break below the 50-day SMA will signal a possible change in trend.

The third-ranked cryptocurrency on CoinMarketCap has formed a symmetrical triangle. The next trending move is likely to start after the price escapes the triangle.

If the bulls can breakout and close (UTC time) the price above the resistance line of the triangle, the uptrend is likely to begin. The pattern target of this formation is $0.2707. However, it is unlikely to be a straight dash up as the bears will mount a stiff challenge at $0.235688 and again at $0.246094.

The bearish view will come into play if the XRP/USD pair turns down from the current levels and plummets below the support line of the triangle. Below this level, the target objective is $0.1244. However, the bulls are likely to defend the $0.16 and the $0.14 levels aggressively.

If the bulls can carry the fifth-ranked cryptocurrency on CoinMarketCap above $280.47, a new uptrend is likely. The target objective of this up move is $350.

However, if the BCH/USD pair turns down from $280.47, a few more days of range-bound action is likely.

The bearish scenario will come into play if the pair breaks below the moving averages. Such a move will indicate that the bears have overpowered the bulls and a drop to $200 could be on the cards.

Bitcoin SV (BSV) has been trading just below $200 levels for the past few days. Both moving averages are flat and the RSI is close to the midpoint, which suggests a balance between buyers and sellers.

If the bulls can push the sixth-ranked cryptocurrency on CoinMarketCap above $200, a move to $227 is possible. If the BSV/USD pair turns down from this level, the range-bound action is likely to continue. Instead, if the bulls can propel the pair above $227, a new uptrend is possible.

On the downside, the critical support to watch out for is $170. If this support holds, the pair will extend its consolidation for a few more days. But if the support breaks down, the pair can drop to $146. Traders can wait for the pair to make a decisive move out of the range before initiating a positional trade.

Litecoin (LTC) has been gradually grinding lower. The bulls have held the 50-day SMA ($45) for the past few days but unless the altcoin bounces off strongly from the current levels, the risk of a breakdown is high.

Below the 50-day SMA, the seventh-ranked cryptocurrency on CoinMarketCap is likely to drop to $41.72 and then to $39. If this support holds, the LTC/USD pair might extend its stay inside the $39–$51 range for a few more days.

Alternatively, if the pair rebounds off the current levels, it can reach the overhead resistance at $51. If the price turns down from this level, the range-bound action is likely to continue. But if the bulls can propel the pair above $51, the momentum is likely to pick up. The target objective of this new uptrend is $64.

Although bulls have not been able to propel Binance Coin (BNB) above the overhead resistance of $18.1377, they have not allowed the price to sustain below the moving averages either, which is a positive sign.

The bulls are likely to make another attempt to push the eighth-ranked crypto-asset on CoinMarketCap above $18.1377. If successful, the momentum is likely to pick up. The first target objective is $21.50 and then $24.

Conversely, if the BNB/USD pair slips below the moving averages, the bears are likely to be back in action. They will attempt to drag the pair to $15.50 and then to $13.65.

EOS has been stuck between the moving averages and the overhead resistance of $2.8319 for the past few days. Both moving averages have flattened out and the RSI is just above the 50 level, suggesting a balance between supply and demand.

A break below the moving averages will indicate an advantage to the bears and can drag the ninth-ranked cryptocurrency on CoinMarketCap to $2.3314.

On the other hand, if the EOS/USD pair bounces off the moving averages and breaks out of $2.3314, it will suggest that the bulls have overpowered the bears.

Above this resistance, a move to $3.1104 is possible. If this level is also scaled, the momentum is likely to pick up, which could open the doors for a rally to $3.8811.

Cardano (ADA) is witnessing profit booking after a strong run. The altcoin can pull back to the 38.2% Fibonacci retracement level of $0.0751964. The 20-day EMA ($0.0748) is just below this level. Hence, the bulls are likely to defend this zone aggressively.

If the 10th-ranked cryptocurrency on CoinMarketCap rebounds off the 20-day EMA, the bulls will attempt to propel it above $0.0901373. If successful, the uptrend is likely to resume with $0.1–$0.10652 as the target objective.

Conversely, if the bears sink the ADA/USD pair below the 20-day EMA, a drop to the 50% retracement level of $0.0705811 is possible. A break below this support will indicate that the momentum has weakened.

The 20-day EMA has been flattening out and the RSI is just above the midpoint, which points to a balance between demand and supply. In the short-term, the 11th-ranked cryptocurrency on CoinMarketCap might remain stuck between $2.7301 and $3.1384.