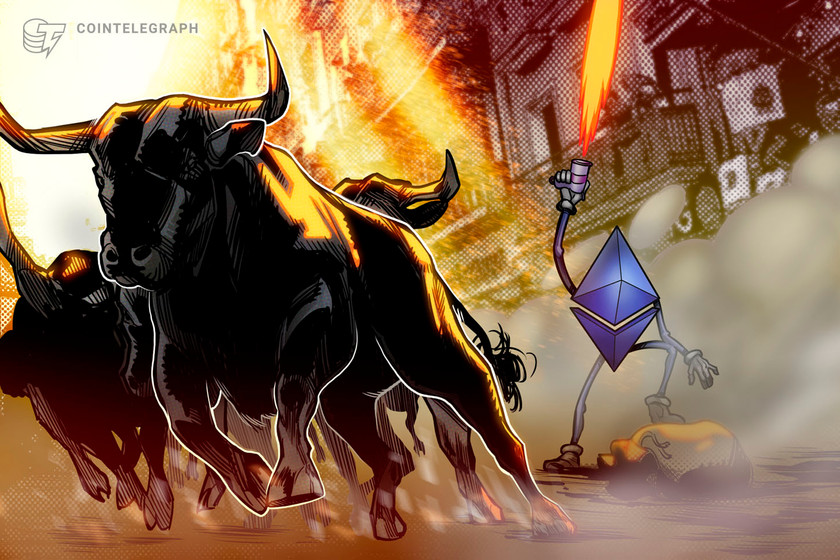 A falling wedge setup, as well as a rumor of Amazon preparing to accept cryptos, also boosts Ether’s upside appeal.

The price of Ether (ETH) jumped to a three-week high on Monday, triggered by similar gains in the Bitcoin (BTC) market that appeared in the wake of rumors about Amazon’s foray into the cryptocurrency sector.

A job posting from the retail giant showed that it is seeking an executive to build its “digital currency and blockchain strategy.” Meanwhile, global media reports have been speculating, based on inside sources that Amazon would start accepting Bitcoin as payments. As a result, the BTC/USD exchange rate surged to its six-week high after the news.

Ether, whose 30-day correlation with Bitcoin stands at 88%, surged likewise on Amazon’s crypto integration rumor. On Monday, the ETH/USD exchange rate soared to an intraday high of $2,390, reaching its highest level since July 8. The pair was up more than 6.7% as of 12:20 GMT.

However, measuring from its previous bottom of $1,720 on Tuesday, the net upside rebound came out to be 38.94%. The retracement looked strikingly similar to the bullish price action between June 22 and July 7, wherein ETH/USD rebounded by more than 40% after bottoming out at $1,700.

That said, Ether bottomed out twice near the $1,700 range before rebounding higher by 38%–40%. Analyst Jonny Moe spotted that mirrored retracements move and ruled them out as a double bottom pattern.

In detail, double bottoms are bullish trend reversal patterns, consisting of two troughs around the same level hanging by a neckline resistance. As it plays out, the price eventually flips the neckline resistance as support and rallies higher by as much as the maximum pattern’s height.

Ether fits the description. It has formed two consecutive bottom levels at around $1,700. Meanwhile, its neckline resistance is near $2,390. Therefore, the maximum pattern’s height is $690.

Should the ETH/USD rate break above the $2,390 neckline resistance, accompanied by a spike in volume, the pair will be expected to extend its upside move by approximately $690. That would roughly take it toward $3,000 (with $2,948 serving as a psychological bullish target based on historical price action).

Another technical pattern in play outdoes the double bottom setup’s upside target by predicting Ether prices at near $3,250.

Dubbed as a falling wedge, the pattern develops when the price trades lower inside a range that begins wide but contracts during the downtrend. It eventually prompts the price to break bullish while setting up its profit target at a level situated typically above the wedge height (if measured from the breakout point).

So, it appears, the ETH/USD exchange rate is undergoing a bullish breakout confirmed by a high-volumed close above the wedge resistance trendline. The profit-taking target for the current setup is $1,208 above the breakout level, which puts the price en route to $3,257.