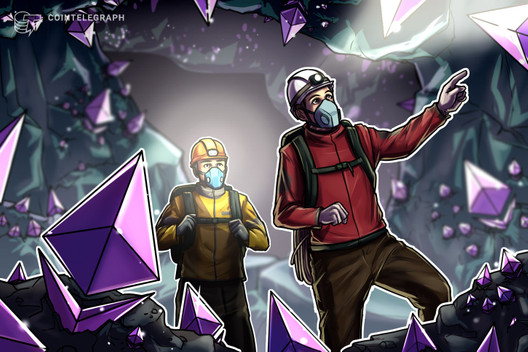 While a minimum stake of 32 ETH is needed to become a validator on Ethereum 2.0, staking pools and services make the participation possible for everyone.

As the Ethereum 2.0 upgrade approaches, users have been showing an increasing interest in the staking process, which would allow them to make a passive income by validating the new network.

This is evidenced by the growing number of Ether (ETH) wallets and ETH deposits on cryptocurrency exchanges. According to a recent report published by analytical company Arcane Research, the number of Ethereum wallets containing 32 ETH or more — the minimum amount of coins needed to run the staking node — have increased by 13% over the year, and the number of “Ethereum 2.0” Google search queries have grown by around six times since March.

While some users have already opted to run their own validator node, others are still choosing among becoming an independent validator, joining a staking pool or using staking provider services. But is there actually any difference?

How will staking work?

The upgraded Ethereum network will switch from the proof-of-work to the proof-of-stake consensus algorithm, replacing miners with validators who will bet their coins to verify transactions. Once validators verify honest transactions, they will receive the rewards in the form of passive income — this process is called staking.

At the moment, the exact size of an annual reward for Ethereum stakers is still unknown. However, according to the project’s roadmap, this value will vary from 1.56% to 18.1% and will be inversely proportional to the total number of validators: When the network increases, rewards contract.

On the one hand, a staking model can be attractive to a wide range of crypto users because there is no need for expensive mining equipment or special technical skills and might look as simple as having a bank deposit. All that is needed to receive annual interest on staked funds is to store ETH on a hardware wallet.

However, an in-depth analysis of the requirements for becoming a validator on the Ethereum network has shown that not everything is as simple as it might seem at first glance. The minimum entry threshold of 32 ETH is just one of such requirements.

For example, given the ETH exchange rate of $250, the user will need to invest $8,000 to become a validator on the Ethereum 2.0 blockchain. But what about the reward? Taking into account the cost of validation of $180 and an average reward of 5% suggested by Ethereum developer Justin Drake, the annual profit from staking 32 ETH can be around $190. So, given the possible risks of Ether’s price experiencing volatility and users being unable to withdraw funds, this reward model is unlikely to allow an average staker to hit a big jackpot.

Another task users will have to deal with to be a full validator is running their own validator node. As evidenced by a survey published by Consensys, 33% of the ETH users are ready to perform this task. But that’s not all. Additionally, validators would be required to ensure the uninterrupted functioning of the hardware wallet. If users disconnect, they lose all their daily income. Even worse, if at some point their stakes drop below 32 ETH, users will lose the right to be a validator.

The Ethereum staking entry threshold is not as high as the cost of running a master node on other blockchain networks, such as Dash, and for many users, high barriers to enter may be unaffordable. That same survey conducted by Consensys also showed that 33% of ETH owners do not intend to participate in network staking, and 71% of those who refused said that they do not hold enough Ether to become a validator.

Third parties come to the rescue

The above-mentioned limitations can be circumvented if joining a so-called staking pool or staking-as-a-service providers. Such third-party services — either decentralized or centralized — offer staking on the users’ behalf and relieve them of the need to worry about launching special software or keeping the network online during the life of the staking deposit. And if launching one’s own node can be compared to opening a deposit account at a bank, then staking providers act as brokers, taking on all the risks and maintenance expenses for a certain fee.

The biggest advantage of such solutions is the ability to earn on staking with any amount of ETH, which becomes a way out for many users who cannot afford to keep their own node. According to Consensys, at least 33% of Ethereum users plan to use third-party services and 20% of the respondents who previously revealed the intention to run their own validator nodes said they would consider using a staking service instead. This raises the question: Which is the better option — a staking pool or a staking-as-a-service provider?

Today, many crypto exchanges offer staking services for PoS-based coin owners with daily income payments. For example, Poloniex does not impose any requirements on the terms of deposits — the user can trade and withdraw funds at any time. For this, however, users are charged a 25% fee on their rewards, which is said to cover operating expenses and risks associated with the management of the service.

Bitfinex, another major crypto exchange, claims that it doesn’t charge a fee for its current staking programs, holding a small portion of staking rewards instead. Additionally, as stated on Bitfinex’s website, in some cases, its staking service provider can also take a portion of the rewards collected through the exchange. Meanwhile, staking services provided by Bitfinex are available for any category of users since it’s enough to have as little as $0.10 to start receiving rewards on the platform.

Paolo Ardoino, the chief technology officer at Bitfinex, revealed to Cointelegraph that the cryptocurrency exchange has the biggest Ethereum cold wallet and is planning to be a key part of Ethereum staking. According to him, Ethereum staking will be quite profitable for users who keep their funds on exchanges:

“Exchanges like Bitfinex will charge a tiny fee to cover operation costs, but the large majority of rewards will go directly into the pockets of the users. Not all users want to go through the process of custodying their own assets and learning how to stake properly.”

Changpeng Zhao, also known as CZ, the CEO of Binance crypto exchnage told Cointelegraph that users who actively stake via Binance will be able to earn higher interest rates than those who simply hold cryptocurrency in their accounts:

“Binance will stake a fractional reserve of the Ethereum held by our users, as we still require some funds to be liquid for users to withdraw at any time, while automatically distributing proportionately the rewards to our users.”

Another convenience of centralized platforms and custodial services is that they undertake the conversion of the user’s ETH to ETH2. Cryptocurrency services provider Bitcoin Suisse, for instance, claims that it doesn’t charge any commissions for such a conversion, however, it will take 15% from rewards received by its customers. The platform also promises to monitor the timely update of its own software so that the staking process remains uninterrupted and beneficial for the user.

However, according to some users, staking programs offered by crypto exchanges can lead to the centralization of the Ethereum blockchain. In a conversation with Cointelegraph, Sergey Zhdanov, the CEO of cryptocurrency exchange EXMO, explained that although the exchanges will definitely become the biggest network validators, the influence will be inseparable:

“Data from Arcane Research and Nansen AI shows that Ethereum wallets with at least 32 ETH, the amount required for ETH 2.0 staking, have grown by 13% this year. The amount of these wallets are more than 120K, so the exchange wallets are taking just 1% of them.”

Alongside the crypto exchanges, custodian services provided by some institutional players also appear to be willing to offer such services. According to a PricewaterhouseCoopers report, 42% of crypto hedge funds are also involved in cryptocurrency staking.

Related: ETH Miners Will Have Little Choice Once Ethereum 2.0 Launches With PoS

Zhdanov also pointed out that many big players will likely be staking ETH by themselves as a tool to hedge the risks of their portfolio and that the popularity of ETH among other altcoins working on PoS will help reduce the centralization risk.

Speaking about the probability of centralization, Bitfinex’s Ardoino told Cointelegraph that this threat can be possible only in the early phases of the upgrade, adding: “Education on the importance of staking from own wallets will be a key factor in order to reduce centralization.”

Besides, according to CZ, staking is particularly effective in helping stabilize cryptocurrency prices, as it encourages users to make market buys when purchasing tokens, as well as rewards limit sell orders rather than market sell orders, as users continue to earn staking rewards while their order hasn’t filled yet. He added:

Staking pools or decentralized exchanges can be an alternative for those who are concerned about possible centralization and penalties incurred, for example, for going offline. As the decentralized nature implies, everything from rewards to risks is shared among the members of such pools.

For example, decentralized staking pool Rocket Pool claims that a user deposit cannot be assigned to a “bad node” since all the pool members share the risk of nodes being slashed and, therefore, the size of the penalty. Thus, if one node fails, each pool member will lose a small number of funds. However, in the case of running a node, it’s the user who’s at risk of losing everything.

In addition to so-called socialized losses, Rocket Pool introduced its native token that represents a tokenized staking deposit and allows stakers to instantly receive a reward and withdraw it at any time. In addition, the pool does not charge fees for staking. However, in order to join the pool, users will need to have a minimum of 16 ETH — half as much of the minimum amount needed to run an individual validator node, but a lot more than what crypto exchanges would require.

What do users say?

The entry threshold to become an Ethereum validator has become the most discussed issue among users interested in staking. Many of them argue that 32 ETH is too much and noted that if the required amount was smaller, there would be many more validators on the new network.

Others said that they wouldn’t lock up 32 ETH just to secure the Ethereum network unless the staking rewards were higher than 10% per year, given that the possible profit could be negligible compared to losses in the event of a coin price drop. Although the exact staking reward size still remains unknown, many users who have revealed their plans to use third-party provider services already said they would choose the platform that offered at least 7.6% in revenue.

There are also those in the crypto community who appeared to be concerned about the threat of Ethereum centralization, rather than the cost of staking. They, however, appeared to be in the minority. Notably, a significant part of users spoke out in defense of the entry threshold of 32 ETH, comparing this amount to tens of thousands of dollars needed to own master nodes in blockchain networks, such as Dash.

While the launch date for Ethereum 2.0 is still open, users have time to decide whether they want to participate in the stake or not and how exactly they want to do it. As the examples discussed in this article show, almost any crypto user can become a validator of the new network and receive passive income regardless of their financial and technical capabilities.

Ethereum 2.0: The Choice Between One’s Own Node and a Staking Service originally appeared on CoinTelegraph.com