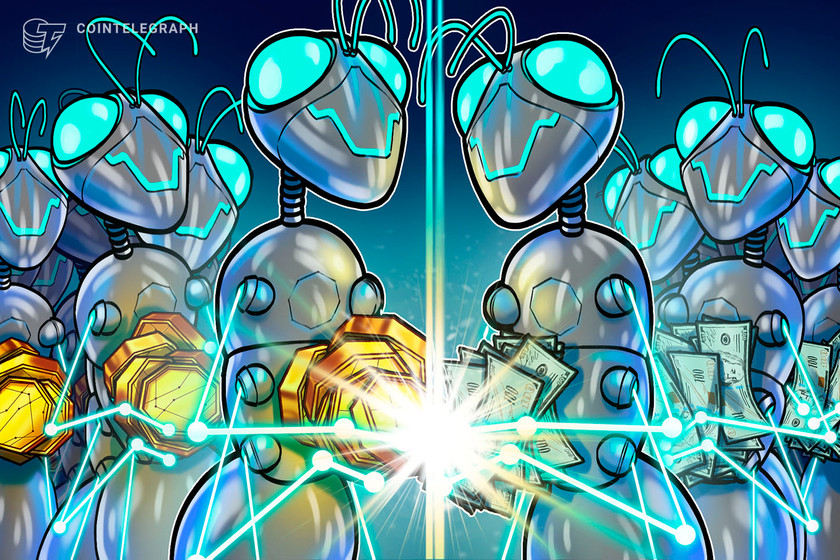 What do you get when you cross a cat, a Pokemon, and an Iron Age warrior? A venture capital fund, of course!

One of the toughest puzzles in crypto is figuring out what to take seriously.

On Friday, the DeFi Alliance — a decentralized finance startup incubator and accelerator — announced a list of 11 new members. Some were predictable, such as oracle provider Chainlink and VC stalwart Blockchain Capital, but one name stood out in particular: eGirl Capital, the social media menace and upstart venture capital outfit inspired by a horned-up Internet subculture.

The announcement prompted an industry-wide heavy sigh and rubbing of the eyes:

While it might be easy to pass the group off as a joke gone too far (by that standard the t-rex in Jurassic Park is a pet that got off-leash), eGirl has been included in some high-profile press releases of late. The group participated in a $4.9 million funding round for decentralized finance protocol Alchemix, and has also announced investments in Radicle and Unisocks. They’ll be releasing the first episode of a in-house podcast series next week.

As for their funding, in a question-and-answer document this reporter caught a glimpse of a figure prior to a committee decision to delete it and offer no comment in an effort to appear more “mysterious”; if accurate, it was staggeringly high.

Their arrival on the investment scene comes amid a period of professionalization and institutional adoption for crypto. Hedge funds that previously dismissed cryptocurrencies as a scam are now setting up trading desks. The assets are getting to be so boring that retirement funds are allocating money into digital currencies.

eGirl made it clear, however, that they’re willing (and perhaps eager) to lob a glitter bomb into the midst of the increasingly buttoned-up affair. As DAO and community growth specialist Pet3rpan put it:

“egirl/eboy aesthetic is a big fuck you to traditional ideals of culture of the last 10 years, we dont care that we aren’t cool.”

Traditional venture capital organizations bring varying degrees of utility to a project besides money. Delphi Digital, for instance, can actively contribute to the architecting and engineering of the tokenomics and contracts of a protocol. Many offer public relations expertise and can attract significant publicity.

So why would anyone work with an organization overwhelmingly peopled with anons? And, likewise, what do the anons think they can bring to the table?

“Crypto was started by an anonymous founder with strong pseudonymity built into the heart of the bitcoin protocol and all those who followed it. Bitcoin is stronger for it too,” said Eva Beylin, one of eGirl’s few ‘doxxed’ members and the director of The Graph Foundation. “[…] While egirl has invested in a wide range of anon and non-anon projects, anon funds funding anon teams can reverse this trend and bring back the privacy preserving qualities we all value deep down in our heart of hearts.”

eGirl member Scoopy Trooples, who is also a core team member for eGirl portfolio protocol Alchemix, noted that eGirl’s involvement was key in helping to generate ideas and refine the project’s wider vision. In a Tweet, they also thanked eGirl for bootstrapping liquidity, fostering insider connections, and promoting the project:

@egirl_capital for being quick to understand the concept of our application and providing ample funding for our initial sushi pool. Their investment thesis into Alchemix was a fantastic piece that raised awareness. Industry connections through them have also been instrumental.

“eGirl is committed to supporting decentralized primitives for dapps and DeFi. We’re frequent users and contributors so we know first-hand what brings value to users and the community. Also, memes and anime.”

In some ways, their emergence feels inevitable: if traditional VCs are increasingly comfortable investing in anon teams and DAOs, why wouldn’t the VCs eventually go anon themselves?

“eGirl capital is merely the resultant product of a world where traditional limits and restrictions are finally being broken through,” said Twitter trader and personality loomdart. “We are reverting to a system with less hand rails, and while this may seem scary it lets true talent stand out, unhindered by historical ties.”

He followed this quote up shortly after with a message bemoaning it for sounding too much like a “battle cry from the war of the roses.” It was obvious, however, that he meant it.

While eGirl may be the first popular example of an all-anon crypto VC, it won’t be the last. Given how they’re comparatively long in the tooth, the group offered some advice for enterprising frog avatars looking to form their own investment organizations, including members holding each other accountable with clearly-defined roles and taking time to develop sophisticated, high-conviction investment theses.

“The nature of an anon decentralized collective is naturally to be very adhoc about things. While this may work in the early days, establishing norms and organizational structure to the collective will help the group to coordinate and persist,” they said.

.@egirl_capital will become the Berkshire Hathaway of our generation

this is an unrivalled investor dream team, books will be written, movies will be made pic.twitter.com/RiYYsuiecW

The irony, of course, is that eGirl itself remains self-evidently ad hoc. When this reporter asked if it would be appropriate to refer to a member as a “partner at eGirl Capital,” the question set off a brief flurry of debate about whether “partner” entails legal connotations and if the word implied a formal hierarchy. Different members even offered contradictory answers as to whether or not the group can be considered a VC in the traditional sense:

So what happens when the group finally decides what, exactly, it is? When the joke goes as far as it can, propelling the eGirls — whether in spite of or due to the anime, anonymity, and bad puns — into the same lofty echelons of success as the Alamedas and the Delphis of the world?

They offered a simple vision:

“First she is an eGirl, then she becomes an eWoman and later an eQueen.”