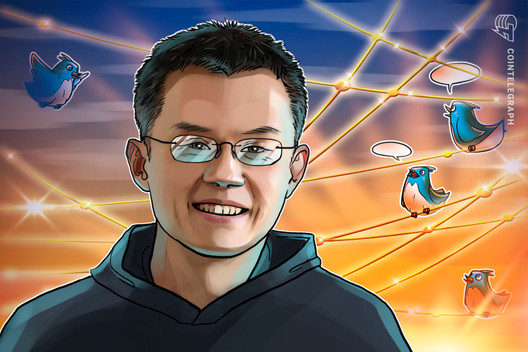 Binance’s founder said Twitter is not part of some broader goal, but a way to interact with the crypto community.

Active Twitter user Changpeng Zhao, or CZ, CEO of crypto exchange giant Binance, explained his use of social media, which has played a key role in his exchange’s community engagement.

CZ said his Twitter activity is not part of any overarching goal. “It’s really just a way for me to interact with our community, which I budget roughly 20% of my time to,” CZ told Cointelegraph.

CZ’s Twitter game has been strong since Binance’s inception

CZ said he has given social media this type of attention since the exchange’s early days. Binance kicked off its initial coin offering, or ICO, in 2017, becoming one of the biggest players in crypto in the following years.

After leaving Slack due to security problems, Binance shifted to Telegram, where the exchange now hosts hundreds of thousands of participants. “Nowadays, if I jump in there, it immediately becomes an AMA session,” CZ said, adding:

“With a large amount of users chatting together, whatever I say only stays on the screen for two seconds. It just scrolls too fast. It’s very difficult to view the chat history.”

CZ noted Twitter as effective for his community engagement currently, as the platform allows vast viewership. “I personally don’t have a strategic goal when Tweeting,” CZ said. “I just be myself when I tweet,” he explained.

Binance holds a large social media presence, which CZ said is a result of his and the company’s interaction with participants of the industry.

“Part of that is also my unfiltered expressions which can also come with some criticism, and my intention is never to hurt anyone even when the Twitterverse tries to stir up the pot. No one is perfect and we’ve all had our share of blunders. I think it is important for the community to know who we are, how we think, etc.”

The CEO said he puts significant effort into hearing out the community, as well as fellowshipping via interviews and other formats, which all leads back to Binance’s ultimate improvement.

Binance has become a behemoth company, not just by industry standard, but in general, as it recently surpassed the 1,000 employee count, tallying a staggering 2,000% increase in less than three years.

Changpeng Zhao Spends 20% of His Time Interacting on Twitter originally appeared on CoinTelegraph.com