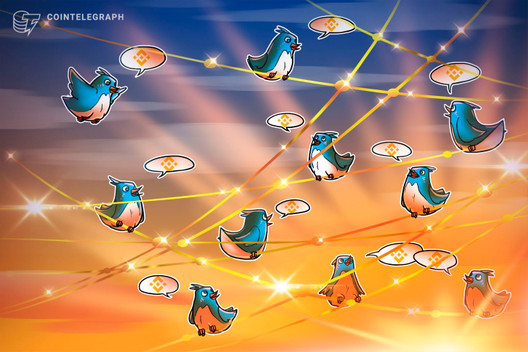 Binance Coin is now the third crypto to receive a branded hashtag on Twitter, which appears to be in preparation for its three year anniversary.

Binance and its eponymous cryptocurrency, Binance Coin (BNB), is the third entity to receive a branded emoji hashtag following Bitcoin (BTC) and Crypto.com.

This was announced by Binance’s CEO, Changpeng Zhao, who simply tweeted #BNB — showcasing the new emoji.

The co-founder appears to be visibly excited with the cosmetic change, writing, “I think I could just sit here and randomly retweet people’s #BNB tweets all day long,” though he appears to have retweeted only one of them so far.

As reported by Cointelegraph earlier, branded hashtags are a little known service provided by Twitter to high value brands. While the only confirmed report cites costs of $1 million, that quote was for billion-dollar corporations during the Super Bowl. The price seems to be significantly lower for crypto companies, though much remains unknown. Cointelegraph contacted Binance to learn more about these hashtags, but did not immediately receive a response.

In Binance’s case, the branded hashtag appears to be part of a marketing push for its anniversary.

The clue to this is the #BinanceTurns3 hashtag, which also includes the Binance emoji as the only specific hashtag to do so.

The exchange appears to have launched a viral marketing campaign to let users receive a Binance non-fungible token. Participants must follow the company on all major social media and share its content with the anniversary hashtag.

The contest lasts for a week until July 7, one week before the actual anniversary on July 14.

It is likely that the exchange wants to create buzz in anticipation of the date, and being the third crypto to receive the emoji hashtag can be helpful for that goal.

Since its launch in 2017, the exchange quickly grew to become the largest crypto-to-crypto exchange by volume by the end of the year. In subsequent years, it continued to expand as its staff count reached the 1,000 mark — up from 50 during its early months.

The exchange has made steps that some see as monopolizing the industry, most notably by buying CoinMarketCap.

Responding to concerns that the exchange is “too big,” Zhao replied in an earlier interview with Cointelegraph that the free market chose Binance, as competition remains fierce to this day.

Binance Gets the Third Branded Emoji on Twitter as Anniversary Comes Close originally appeared on CoinTelegraph.com