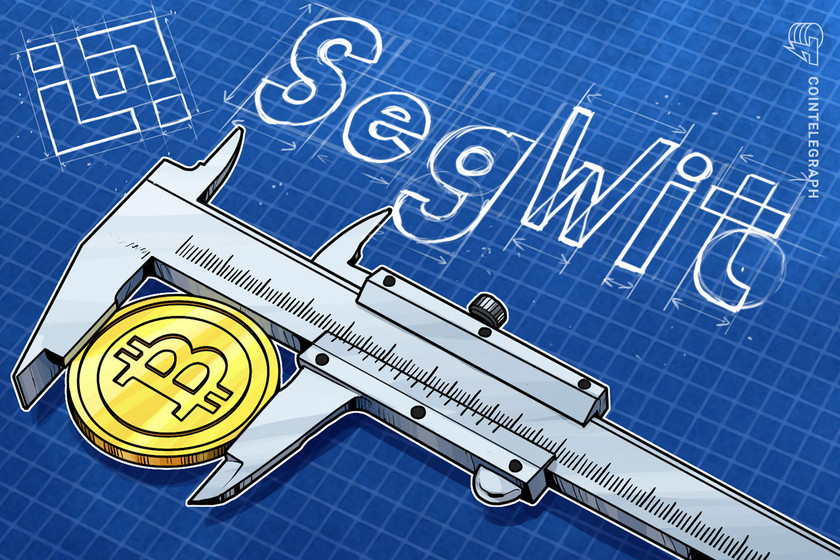 Traders on Binance can now deposit and withdraw to SegWit (bech32) addresses.

Binance, one of the world’s largest cryptocurrency exchange by volume, has incorporated Segregated Witness, or SegWit, support for Bitcoin (BTC) deposits.

The SegWit support was extended to deposits on Christmas Eve, Binance said in an official statement. The protocol upgrade was initially enabled only for withdrawals.

“Please note SegWit should help reduce fees; however, if you incorrectly send incompatible assets to the address, your funds will not be recoverable and will result in permanent loss.”

Implemented in 2017, SegWit is a Bitcoin protocol upgrade designed to help scale the network and fix associated bugs. SegWit is known for the way it updates data on the blockchain, namely, by segregating signatures from transaction data. This protocol upgrade allows more transactions to be stored in a single block, thus increasing transaction capacity.

Data from transactionfee.info show that roughly two-thirds of Bitcoin payments currently use SegWit. Although Bitcoin has emerged as a monetary instrument for storing value, it continues to face scalability limitations, which some argue has impeded adoption for everyday use.

The Lightning Network has been offered as a viable layer 2 scaling solution for Bitcoin as a payment protocol. Unlike SegWit, which was a soft fork update to the Bitcoin protocol, the Lightning Network is an additional layer that could enable instant, lower-cost transactions.

Despite limited transaction capacity, Bitcoin remains the de facto leader of the digital currency market. Its dominance over other crypto assets recently hit one-year highs. At the time of writing, Bitcoin’s dominance rate was 68.7%, according to CoinMarketCap.