Bitcoin price rejected above $10,000 for the third time in a month, showing the multi-year resistance level remains a challenge for bulls to overcome.

Within the last hour Bitcoin (BTC) price rose to $10,180 on BitMEX before quickly reversing to $9,600. The quick rejection means that for the third time in 30 days Bitcoin price has rejected at the $10,000 resistance level.

Three factors that may have contributed to the volatility are: the Federal Reserve’s Federal Open Market Committee (FOMC) meeting, the liquidation of $14 million worth of short contracts, and the continued resilience of the multi-year resistance area from $10,000-$10,500.

The Fed had an FOMC meeting shortly before the sudden spike in Bitcoin’s volatility and during the meeting Federal Reserve chairman Jerome Powell stated the jobs market may have hit the bottom.

Since March, institutional investors have been cautious about the stock market’s short-term trend due to the state of the labor market.

The unemployment rate was initially projected to remain in the double digits and this was a major concern to high net-worth investors. To shield against downside risk, these investors took shelter in safer alternatives like low-risk bonds.

“We want investors to price in risk like markets should. [He] says Fed would never hold back support for the economy because it thinks asset prices are too high. Popping asset bubble would hurt job-seekers.”

Despite the positive data coming out of the FOMC meeting, both the U.S. stock market and Bitcoin price dropped after it.

The trend of the largest digital asset on CoinMarketCap and equities suggests that as soon as the Fed meeting ended a sell-the-news type pullback occurred.

Within a 30-minute window, $14 million worth of Bitcoin shorts were liquidated on BitMEX alone. Compared to other exchanges, the price of BTC rose higher on BitMEX by around $100. 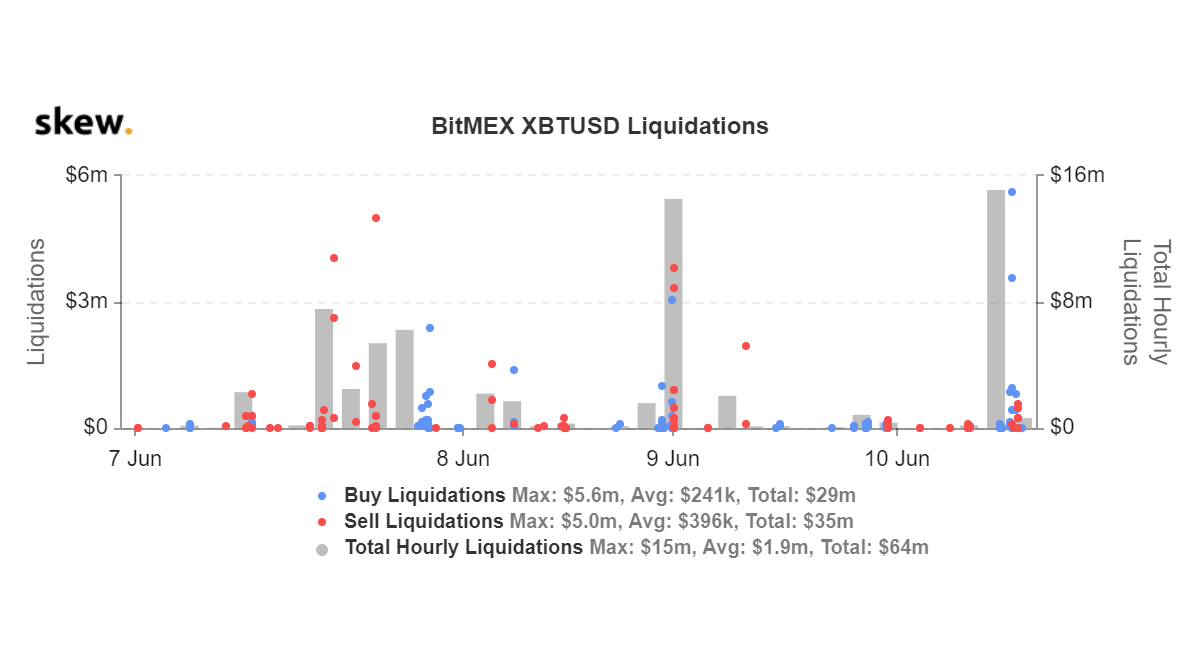 As the price of Bitcoin hit $9,600 in a 4% drop within less than 15 minutes, another $2 million worth of longs were liquidated.

In total, in about an hour, around $16 million worth of futures contracts were liquidated in quick succession.

Due to the decline in spot volume in the Bitcoin market since early May, the futures market has accounted for a large portion of the daily BTC volume.

When tens of millions of dollars worth of futures contracts are liquidated in a highly volatile price move in a short period of time it can cause the price of BTC to move quickly to either direction.

Since mid-2019, the $10,000-$10,500 area has acted as a strong resistance zone for Bitcoin. Every time the price of BTC attempted to break out of this range it was met with a brutal pullback.

Recently, the price of Bitcoin surpassed $10,000 moments before its big fall to $9,600. Cryptocurrency investor Koroush AK said the move reduced the importance of $9,850 as another resistance level.

In the near-term, the sudden upsurge may weaken the barrier BTC has to break to see an extended rally. But, it also leaves BTC vulnerable to a steeper pullback given that it hit an important liquidity area.

3 Reasons Why Bitcoin Price Continues to Reject at $10,000 originally appeared on CoinTelegraph.com