On-chain data provides valuable insight into the Bitcoin network and BTC price action, but which metrics are useful for the average investor?

The public nature of blockchains continuously generates an endless stream of data, as every single transaction and address leaves a clear trace. This information, known as on-chain data, provides a way to precisely analyze cryptocurrency network activity.

Some on-chain indicators such as the number of active addresses, HODL wave, and hashrate have become well known in the industry, but the general public is really only scratching its surface.

As the number of on-chain metrics available has grown to an overwhelming amount, figuring out which are the most useful to the average investor has also become a task. A good place to start is with Average Exchange Deposits, Bitcoin ‘Sent From’ addresses, and Miners to Exchanges indicators.

There is usually some confusion when analyzing an exchanges’ inflow and outflow. Buyers don’t need to withdraw funds after purchasing cryptocurrencies and the same can be said regarding inflows, as funds could stay dormant for quite some time before any trading occurs. 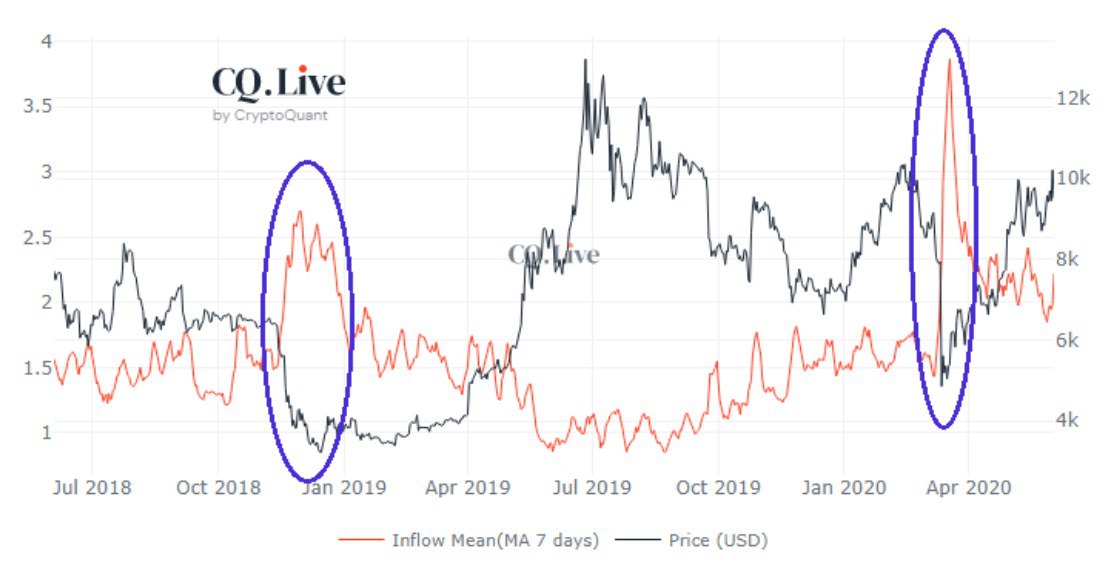 A better way to quantify such flow is by measuring the average size of deposits. As shown in the chart above, every peak size in average deposits coincides with a local Bitcoin price bottom. This movement could be a trace of a large crypto whale capitulating and cutting losses.

Such an indicator holds especially true during a longer-term downtrend. As previously mentioned, on-chain indicators should not be analyzed in total isolation. Capitulation could only occur after several months when the price fails to display strength.

Instead of measuring the active number of addresses, the 7-day average of the ‘Sent From’ addresses metric gives clearer insight into network activity. This dramatically reduces noise from exchange withdrawals and double counting from mixing services.

Notice how every major peak in average daily Sent From addresses coincides with the local Bitcoin price short-term top. Those sudden spikes in holders moving coins indicates short-term discomfort, although this is not necessarily indicative of a change in the market’s trend.

Once again, this indicator should not be interpreted without acknowledging market trends. Such a case happened during the April to July 2019 rally as the metric spiked twice, signaling a cool off period although prices continued to spike a few weeks later.

glassnode provides another detailed view of Bitcoin miners transfers to exchanges. There were 1,800 BTC mined per day on average before the halving in May and this figure has now been reduced to 900.

Although exchanges are not necessarily the only way for miners to unload their position, it’s by far the best metric to gauge their short-term price expectations.

The above 7-day moving average chart shows that such flow was drastically reduced around the Bitcoin halving and the figure remained at its lowest levels in 12 months.

Meanwhile, Bitcoin remained relatively steady at $9,800, failing to surpass the $10,000 mark. The reduction in the transfer to exchanges can be interpreted as a somewhat bearish indicator.

This accumulated position by miners refusing to sell could be a potential catalyst for a more substantial downside, in case Bitcoin price is unable to sustain higher levels. Unlike futures contracts open interest, where short-sellers get liquidated as the market moves up, no such effect would happen as the amount of BTC held by miners’ increased.

On-chain analysis is not an exact science as trading is inherently a human-driven activity, at least for now.

When faced with conflicting signals, investors tend to rationalize and exclude those not aligned with their mindset and desires.

As previously discussed, there is a lot of noise in the market but analyzing on-chain data can help investors separate the signal from all the distracting noise.